Vocational GCSEs may be holding girls back, research suggests 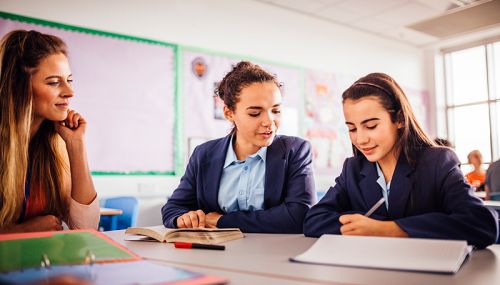 Girls who take ‘applied’ subjects, such as health and social care or home economics, at GCSE may be facing educational disadvantage as a result, a new study has found.

The researchers, from the Centre for Longitudinal Studies at the UCL Institute of Education, used data from Next Steps, a study of 16,000 people born in England in 1989-90, and from the National Pupil Database. The research was funded by the Nuffield Foundation and the Economic and Social Research Council.

Young people who took applied GCSEs were less likely to stay on at A-level and to take ‘facilitating’ A-levels favoured by prestigious universities. Vocational subjects appeared to put both boys and girls at a disadvantage, even after taking into account the fact that less privileged young people and those with lower prior Key Stage test scores were more likely to take applied subjects at GCSE.

This disadvantage linked to applied GCSEs was particularly strong for girls. In particular, the researchers found that girls studying applied GCSEs were less likely to take ‘facilitating’ A-levels such as the sciences and maths. These findings suggest that girls could be held back if their schools encourage them to take those options.

Vanessa Moulton, the lead author of the paper, published today by CLS, said applied subjects can be particularly unhelpful for girls who want to progress in education: “Applied subjects are particularly strongly gendered, with girls and boys taking completely different subjects. Essentially what you see is predominantly working class girls taking subjects such as health and social care, which do not necessarily enhance their future prospects. Boys are more likely to take subjects such as engineering or information and communication technology, which may be less limiting post-16.”

The research also examined whether pupils had taken ‘EBacc’ subjects for GCSE, and found pupils studying them were more likely to stay in education after 16. This was particularly true for girls.

The findings appear to give some support to Government reforms, which see schools judged on the proportion of pupils gaining good GCSEs in academic subjects, including languages, history or geography (known as the ‘EBacc’). Opponents of the EBacc have argued it leads to too narrow a curriculum, and that these subjects are not always suitable for less able pupils.

Vanessa Moulton said: “We are unable to find evidence to support the value of less academic – non-EBacc – or applied subjects, not just on average, but for any social group, including working class pupils. In fact, for white pupils and girls in particular, taking EBacc subjects was strongly associated with staying on in full time education past 16.”

Meanwhile another paper in the same series, also published today, highlights the influence that schools have on the GCSE subjects that pupils take. Researchers found that the biggest influence on whether or not pupils choose to study academically demanding subjects at GCSE, is the average attainment at their school and not their own past performance. The paper uses data from the National Pupil Database on mainstream English state-funded schools for the academic year 2005-06.

Jake Anders of the UCL Institute of Education, the lead author on the study, said: “These results highlight that we should be sceptical of considering young people’s subjects of study purely in terms of ‘choice.’ They are, at most, constrained choices, potentially both for individuals and for schools.”

Some schools with less advantaged intakes may be more likely to offer their pupils more applied subjects, the paper suggests. Alternatively, schools in poorer areas may struggle to recruit good teachers in more academic subjects, and this may prevent pupils from taking certain combinations of options.

The papers will form part of a special edition of the Oxford Review of Education which will be published in early 2018.

1.    Next Steps (previously known as the Longitudinal Study of Young People in England) has been following the lives of about 16,000 young people born in 1989-90 who attended secondary school in England. The study began in 2004 when the participants were in Year 9 and turning 14 years old. Following the first survey, the participants were visited every year until 2010, when they turned 20. The most recent survey took place during 2015-16 when the cohort members were 25 years old. The study has collected a wide range of information across different areas of the participants’ lives, including education, employment, economic circumstances, family life, physical and emotional health, and social participation and attitudes. Next Steps is managed by the Centre for Longitudinal Studies at the UCL Institute of Education, and funded by the Economic and Social Research Council. From 2004 to 2012, the study was managed and funded by the Department for Education. Follow @clscohorts

2.    These two papers form part of a series from the CLS Cross-Cohort Research Programme which will be published in early 2018 as a special edition of the Oxford Review of Education. The full series is as follows:

‘The relationship between A-level subject choice and league table score of university attended: the ‘facilitating’, the ‘less suitable’ and the counter-intuitive’, by Catherine Dilnot, published 13 August.

‘Inequalities and the curriculum: young people’s views on choice and fairness through their experiences of curriculum as examination specifications at GCSE’, by Rhian Barrance and Jannette Elwood, published 19 July.

‘Inequalities and the Curriculum: Philosophical debates on the curriculum and social justice’, by Richard Pring, published 19 July.

3.    The UCL Institute of Education (IOE) is a world-leading centre for research and teaching in education and social science, ranked number one for education worldwide in the 2014, 2015, 2016 and 2017 QS World University Rankings.  It was awarded the Queen’s Anniversary Prize in 2016.  In 2014, the IOE secured ‘outstanding’ grades from Ofsted on every criterion for its initial teacher training, across primary, secondary and further education programmes.  In the most recent Research Excellence Framework assessment of university research, the IOE was top for ‘research power’ (GPA multiplied by the size of the entry) in education. Founded in 1902, the Institute currently has more than 8,000 students and 800 staff.  In December 2014 it became a single-faculty school of UCL, called the UCL Institute of Education.
www.ucl.ac.uk/ioe

4.    University College London (UCL) was founded in 1826. It was the first English university established after Oxford and Cambridge, the first to open up university education to those previously excluded from it, and the first to provide systematic teaching of law, architecture and medicine. It is among the world’s top universities, as reflected by performance in a range of international rankings and tables. UCL currently has over 35,000 students from 150 countries and over 11,000 staff. Its annual income is more than £1 billion.
www.ucl.ac.uk| Follow @uclnews| Watch www.YouTube.com/UCLTV

5.    The Economic and Social Research Council (ESRC) is the UK’s largest funder of research on the social and economic questions facing us today. It supports the development and training of the UK’s future social scientists and also funds major studies that provide the infrastructure for research. ESRC-funded research informs policymakers and practitioners and helps make businesses, voluntary bodies and other organisations more effective. The ESRC also works collaboratively with six other UK research councils and Innovate UK to fund cross-disciplinary research and innovation addressing major societal challenges. The ESRC is an independent organisation, established by Royal Charter in 1965, and funded mainly by the Government. More information is available at www.esrc.ac.uk.

6.    This research was part-funded by The Nuffield Foundation, an endowed charitable trust that aims to improve social well-being in the widest sense. It funds research and innovation in education and social policy and also works to build capacity in education, science and social science research. The views expressed are those of the authors and not necessarily those of the Foundation. More information is available at www.nuffieldfoundation.org.