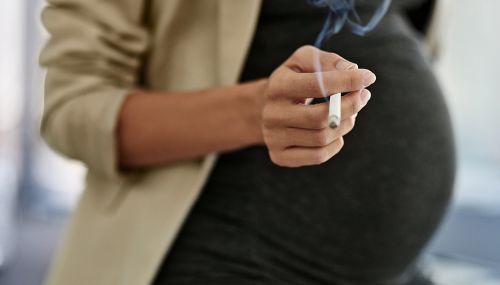 Children whose mothers smoked during pregnancy are not born predisposed to smoking through absorbing nicotine in the womb, a study has found.

Instead, they tend to pick up smoking habits from their mothers when they are growing up. The researchers found that smoking in pregnancy increased children’s chances of developing behaviour problems, but the link between this and being a smoker as an adult only existed for boys and not girls.

The findings confirmed previous research showing that children whose mothers smoked during pregnancy were more likely to smoke in adulthood, compared to those whose mothers didn’t smoke. However, contrary to previous studies, the researchers did not find evidence to support claims that children inherit susceptibility to smoking by absorbing nicotine through the placenta.

Children of mothers who smoked during pregnancy were more likely to display behaviour problems during childhood and adolescence. This was true for boys and girls. However, boys who had conduct issues in adolescence were 74 per cent more likely to smoke in their mid-30s, compared to boys who did not display behaviour problems, while girls who had conduct issues were not at greater risk of smoking in adulthood.

For the daughters of mothers who smoked during pregnancy their adult smoking habits were entirely explained by observing and learning from their mothers during childhood and adolescence. Among sons, their smoking status was mostly explained by their mothers’ influence, but was partly attributable to their behaviour problems.

The report said: “The findings from this study suggested that childhood and adolescence are key periods within life that shape adult behaviours, and so school and other factors, jointly with the family, seem to be strongly incisive. The well-known persistence of antisocial behaviours should convince policymakers to provide social investment during the early stages of life. Moreover, a deeper understanding of the intergenerational transmission of tobacco smoking can provide insights into health prevention, suggesting family-based interventions with the aim to reduce parental smoking and smoking in subsequent generations.”

‘How much and why does the mum matter? Mechanisms explaining the intergenerational transmission of smoking,’ by M.Pasqualini, L. Pieroni and C. Tomassini was published in Advances in Life Course Research in June 2019.