Schools and libraries seize on findings of ‘reading for pleasure’ study 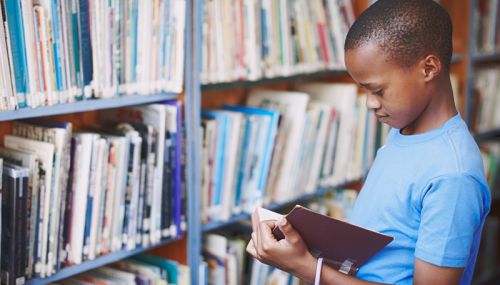 The findings of a remarkable UCL Institute of Education research study are being used to promote reading for pleasure and to help protect school and public library services around the English-speaking world.

The research by two academics at the IOE’s Centre for Longitudinal Studies found that young people who had read for pleasure during childhood achieved higher scores at age 16 in not only vocabulary and spellinThe study triggered a massive wave of media coverage and no fewer than 75,000 ‘hits’ on the IOE and Centre for Longitudinal Studies websites. Media organisations as far apart politically and geographically as the Guardian and The American Conservative magazine covered the research.

Today, 18 months later, it is now clear that the study by Professor Alice Sullivan and her colleague, Matt Brown, has had important impacts in not only the UK but Canada, the United States, Australia and New Zealand.

The findings have influenced the thinking of policy-makers, educationists and local authority administrators. They have also helped to shape policies on reading and libraries in England, Scotland, and internationally – at either a national, regional or individual library/school level.

One Leicestershire secondary school was so keen to ensure that the researchers’ message got across to pupils that it asked the children to read the BBC’s report on the study as homework.

David Blunkett, the former Secretary of State for Education and Employment, was also taken with the research. In his foreword to the Labour party’s education policy review, published last year, he wrote: “… stirring texts and imaginative programmes of learning, which light a candle and engender a love of learning for life, must also be central to our goals. Indeed, an Institute of Education study in autumn 2013 found that children who read for pleasure perform significantly better at school in maths as well as English.”

The study has also been cited many times by schools and state government officials in South Australia in order to support the Premier’s Reading Challenge, a long-running literacy initiative. When the organisers of the Challenge announced that the scheme would focus on secondary schools in 2014 they referred to Sullivan and Brown’s finding that reading for pleasure between ages 10 and 16 boosted all-round attainment.

In Canada the National Reading Campaign has drawn attention to the research in its web-based ‘toolkit’ for parents who want to develop their children’s interest in reading.

In Oregon, United States, library managers have chosen ‘student success’ as one of their key goals for 2014-17, explaining that Sullivan and Brown’s work shows that reading for pleasure can boost children’s all-round performance.

And in Scotland the research was cited by campaigners who successfully resisted a plan to cut school librarian posts in Edinburgh.

Sullivan and Brown’s study is believed to be the first to examine the effects of reading for pleasure on cognitive development over time. They analysed the reading behaviour of approximately 6,000 members of the 1970 British Cohort Study, which is managed by CLS and funded by the Economic and Social Research Council.

Perhaps surprisingly, reading for pleasure was found to be more important for children’s cognitive development than their parents’ level of education.

“As today, March 5, is World Book Day it is really heartening to be able to demonstrate that the findings of our reading for pleasure research have travelled around the world, and that they have been used for such worthwhile purposes,” said Professor Sullivan.

“Since we published our 2013 study we have also looked at the effects on adults of reading for pleasure, and again we found that there are huge benefits. This second, very recent study, which we completed only a few months ago, showed that reading for pleasure in childhood had a substantial influence on a person’s vocabulary 30 years later.”

* A case study documenting the impact of Sullivan and Brown’s 2013 research has been published on the Centre for Longitudinal Studies website today to mark World Book Day.

“Reading for pleasure puts children ahead in the classroom, study finds”, September 11, 2013

The 1970 British Cohort Study (BCS70) follows the lives of more than 17,000 people born in England, Scotland and Wales in a single week of 1970. Over the course of cohort members’ lives, BCS70 has collected information on health, physical, educational and social development, and economic circumstances, among other factors. Since the birth survey in 1970, there have been eight surveys at ages 5, 10, 16, 26, 30, 34, 38 and 42.

Further information about World Book Day 2015 can be found at http://worldbookday.com/