Can teenagers’ perception of their neighbourhood influence their behaviour? And can physical exercise help children get better results in school?

What impact has the furlough scheme had on diet, sleep and physical activity during the pandemic? And, could self-harm be prevented by identifying risk factors in early childhood?

Below is a round-up of nearly 100 new pieces of research that we’ve added to the CLS bibliography between April and June 2021. The research addresses pertinent questions in the fields of child development, education, social mobility and health and wellbeing.

The CLS bibliography is a searchable database of research using the 1958, 1970, Next Steps and millennium cohort studies. If you have a paper to add to the bibliography, please contact us. 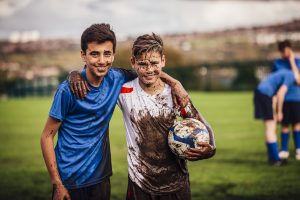 Recent research has found that engaging in physical activity can help children from less well-off backgrounds do better at school.

Analysing Millennium Cohort Study data captured at ages seven, 11 and 14, the researchers found that sports supported ‘self-regulation’ – children’s ability to control their emotions and behaviour – which in turn helped pupils’ academic achievement. This was especially true for children from disadvantaged backgrounds, who had fewer opportunities to engage in physical activity through clubs, swimming lessons, or other paid-for activities.

Dr Michelle Ellefson, Reader in Cognitive Science at the Faculty of Education and a co-author, said: “In the context of COVID in particular, there may be a real temptation to encourage schools to maximise classroom time to stop children falling behind. This study is saying ‘think again’, because playtime and PE lessons benefit the mind in ways that children really need in order to do their best.”

Investigation of the associations between physical activity, self-regulation and educational outcomes in childhood by Fotini Vasilopoulos and Michelle R Ellefson was published in PLOS ONE (Millennium Cohort Study)

A longitudinal and gender invariance analysis of the Strengths and Difficulties Questionnaire across ages 3, 5, 7, 11, 14, and 17 in a large UK-representative sample by Aja Louise Murray, Lydia Gabriela Speyer, Hildigunnur Anna Hall, Sara Valdebenito and Claire Hughes was published in Assessment (Millennium Cohort Study)

On welfare or in work: perspective from single motherhood and early childhood outcomes by Xiaoyun Zhang and Luo, Yiyang was published in Applied Economics Letters (Millennium Cohort Study – paywall)

Childhood socio-economic position and affective symptoms in adulthood: The role of neglect by Anne Mawson and Darya Gaysina was published in Journal of Affective Disorders (National Child Development Study – paywall)

Does time heal all wounds? Life course associations between child welfare involvement and mortality in prospective cohorts from Sweden and Britain by Josephine Jackisch, George B Ploubidis and Dawid Gondek was published in SSM – Population Health (National Child Development Study)

Could the Associations of Changes in Living Arrangement with Mental Disorders Be Moderated or Mediated During COVID-19 Pandemic? by Ming Guan was published in Psychology Research and Behavior Management (Millennium Cohort Study, Next Steps, 1970 British Cohort Study and National Child Development Study)

A Missed Opportunity for Men? Partnered and Employed Individuals’ Involvement with Housework during the COVID-19 Lockdown in the UK by ?brahim Sönmez was published in Social Sciences (Millennium Cohort Study, Next Steps, 1970 British Cohort Study and National Child Development Study)

Problematic Use of Alcohol and Online Gaming as Coping Strategies During the COVID-19 Pandemic: A Mini Review by Shijie Xu, Minkyung Park, Ung Gu Kang, Jung-Seok Choi and Ja Wook Koo was published in Frontiers in Psychiatry (1970 British Cohort Study)

Social class, human capital, and enrollment in STEM subjects at prestigious universities: The case of England by Hyun Kyoung Ro, Frank Fernandez and Benjamin Alcott was published in Educational Policy (Next Steps – paywall)

Who are the low educational achievers? An analysis in relation to gender, emotional stability and conscientiousness by Caroline Wehner and Trudie Schils was published in Applied Economics (1970 British Cohort Study)

Boys don’t cry (or do the dishes): Family size and the housework gender gap by Giorgia Menta and Anthony Lepinteur was published in Journal of Economic Behavior & Organization (1970 British Cohort Study – paywall)

Flocking together and thinking apart: Gendered friendships and decision-making in adolescence by Eirini Flouri, Efstathios Papachristou and Heather Joshi was published in European Journal of Developmental Psychology (Millennium Cohort Study)

In the best interests of children? The paradox of intensive parenting and children’s health by Mara A Yerkes, Marit Hopman, F Marijn Stok and John De Wit was published in Critical Public Health (Millennium Cohort Study)

Is orthodontic treatment associated with changes in self-esteem during adolescence? A longitudinal study by Srichitra Vulugundam, Lucas Guimarães Abreu and Eduardo Bernabé was published in Journal of Orthodontics (1970 British Cohort Study)

Associations between adolescent mental health and health-related behaviors in 2005 and 2015: a population cross-cohort study by Suzanne H Gage and Praveetha Patalay was published in Journal of Adolescent Health (Millennium Cohort Study – paywall)

Sex, ethnic and socioeconomic inequalities and trajectories in child and adolescent mental health in Australia and the UK: findings from national prospective longitudinal studies by Sonia Terhaag, Emla Fitzsimons, Galina Daraganova and Praveetha Patalay was published in Journal of Child Psychology and Psychiatry (Millennium Cohort Study)

Higher education and mental health: analyses of the LSYPE cohorts by Gemma Lewis, Tayla McCloud and Claire Callender was published as a Department for Education Research Report (Next Steps – report)

How is the distribution of psychological distress changing over time? Who is driving these changes? Analysis of the 1958 and 1970 British birth cohorts. by Dawid Gondek, Praveetha Patalay, David G Blanchflower and Rebecca Lacey was published in medRxiv (1970 British Cohort Study and National Child Development Study – pre-print)

Pertussis in Individuals with Co-morbidities: A Systematic Review by Denis Macina and Keith E Evans was published in Infectious Diseases and Therapy (1970 British Cohort Study and National Child Development Study)

Making it against the odds: How individual and parental co-agency predict educational mobility by Ingrid Schoon, Kaspar Burger and Rose Cook was published in Journal of Adolescence (Next Steps – paywall)

@CLScohorts is very excited to be part of the COSMO study team reaching out to up to 25,000 English teenagers to le… https://t.co/XbTnXM7OE1