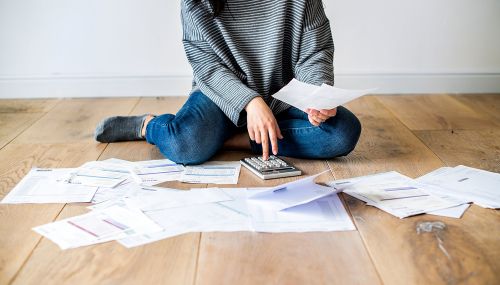 Up to one in five adults with a history of poor mental health reported they were ‘much worse off’ financially a year into the COVID-19 pandemic, compared to one in ten of those who had never had psychological problems in adulthood, according to a new study by UCL researchers.

The study, which looked at the experiences of people in their 50s and 60s living in Great Britain, found that around 20% had high levels of mental ill health throughout adulthood, and it was this group that tended to be the most likely to experience financial problems during the pandemic.

However, even adults who had not experienced symptoms of mental ill health in decades were up to one and a half times as likely to say they faced worsening financial circumstances, compared to their peers who had never had psychological difficulties.

Lead author, Dr Vanessa Moulton (UCL Centre for Longitudinal Studies) said: “The COVID-19 outbreak disproportionately affected the livelihoods and financial circumstances of adults with persistent mental health problems. However, those who had experienced symptoms of psychological distress more than 20 years ago also remained more susceptible to the economic shockwaves of the pandemic than those who never had mental health problems. This new study puts into focus the long-lasting impact poor mental health can have, and how abrupt economic events can heighten earlier vulnerabilities.”

Published today in Social Psychiatry and Psychiatric Epidemiology, the study examines data from more than 14,000 adults born across England, Scotland and Wales in 1970 and 1958, who are being followed by the 1970 British Cohort Study and the 1958 National Child Development Study respectively. The researchers compared how people with different histories of mental health in adulthood fared financially between March 2020 and March 2021, when they were aged 50 and 62. Study participants were asked whether their financial situation had got worse, better or stayed the same during the pandemic, if their employment status had changed, and what actions they had taken to manage their personal finances. The researchers took into account other factors that could have affected their mental health or financial circumstances, such as family socioeconomic status.

Among the 1958 generation, those who experienced psychological problems in their early 30s but had since improved were twice as likely to have increased financial help from friends and family as their peers with no history of mental ill health in adulthood (4.2% vs 2%). Among those born in 1970, those who had poor mental health in their mid-20s were one and a half times more likely to borrow from banks and use credit cards than their peers who had never experienced mental health problems in adulthood (6.1% v 3.9).

Dr Moulton added: “The economic policy measures taken by the government during the pandemic were broadly successful in insuring households against the economic shocks of COVID. Despite this support, most groups who had experienced psychological distress before the outbreak were at greater risk of worsening financial circumstances. They were more likely to borrow from banks and take payment holidays from mortgages and other loans, potentially increasing their debt.

“These people more so than others are likely to be vulnerable to the end of COVID financial supports, increases in the cost of living, and economic recession. With the cycle of poor mental health and personal debt a potential ticking time bomb, it remains to be seen how those with poorer mental health across their lives manage these new economic upheavals. The government must now focus on longer term solutions to improve mental health support and access to financial guidance.”

The study is based on data from two observational studies that have been following individuals from birth and across the whole of their lives. This rich life course data has allowed the researchers to make use of very detailed data to account for a wide range of factors when examining the link between pre-pandemic mental health and financial circumstances during COVID, including early-life socioeconomic factors, and childhood indicators of health and cognitive ability.

However, despite the use of these rich life course data as controls, the authors noted the challenges in establishing cause and effect, since it is impossible to rule out that there could be other, unobserved factors that have not been accounted for, that could also explain the association between mental health and financial circumstances.

Adult life-course trajectories of psychological distress and economic outcomes in midlife during the COVID-19 pandemic: evidence from the 1958 and 1970 British birth cohorts by Vanessa Moulton, Alice Sullivan, Alissa Goodman, Sam Parsons and George B. Ploubidis is available on the Social Psychiatry and Psychiatric Epidemiology website.

The researchers used sophisticated statistical methods to examine patterns in the data, which grouped study participants into five trajectories based on severity, timing and duration of poor mental health experienced across adulthood. Although the five trajectories were not identical in the two cohorts, some of the groupings were very similar.

Change in financial situation was assessed by asking, ‘overall how do you feel your current financial situation compares to before the coronavirus outbreak’: much worse off, a little worse off, about the same (reference category) or a little/ much better off. Change in employment status was derived by asking in the first COVID survey what their employment status was just before the first coronavirus outbreak, and then at each survey during the pandemic.