How much does private schooling raise your pay, and does it make you give more to the community? 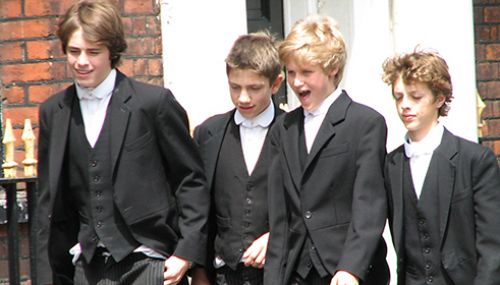 Private schools find themselves in the news lately, more than they usually are. Boris Johnson became the fifth Old Etonian prime minister since the war, and immediately appointed a cabinet in which nearly two-thirds were privately educated, re-affirming once again what the Sutton Trust and the government’s Social Mobility Commission have been revealing about the political influence of the privately educated. At the same time, for the first time in many decades the possibility of radical private school reform has entered the political agenda.

Formal evidence on what private schools do can help people evaluate views about Britain’s private school system and whether there is a need for reform. There are two important findings from our latest research which looks at a cohort born in 1990 and where they had reached by the time they were 25 years old. We compared the privately educated with similar others who were educated at state schools. This is the first scientific study in a peer-reviewed journal to look at the total, long-term effects of going to a private school in the 21st century.

First, private schooling makes a big difference to how well people get on in their young adulthood. Those who were at a private secondary school were 12 percentage points more likely than their state school counterparts to be starting a career in a managerial or professional occupation, and were earning on average 17 percent higher pay.

Second, we searched for specific evidence that private schooling generated a benefit for others. In particular, we wanted to know whether private schools were being successful in inculcating community-oriented attitudes and behaviour, such as volunteering and charitable giving. This is relevant because some private schools put this forward as part of the ‘public benefit’ they provide in order to fulfil their obligations as charities, with their associated tax breaks. (By no means all private schools do make this claim, and in any case a large minority of private schools do not claim charitable status.)

The answer: there was no evidence of any difference in community orientation between those educated privately and by the state. As our article concludes: “on average, the privately educated are just like others in this respect, neither more nor less minded to give up their time and money for the community.”

Of course, every child is different, and these average effects do not apply to everyone. Nevertheless, our findings would seem to put to bed the claim, sometimes heard, that modern private schools are a waste of money. Those who claim this have usually not read (or are ignoring) the evidence concerning those educated before 2000, and go on limited knowledge of just a few schools, or make comparisons only with the so-called ‘best’ state schools (by which is usually meant the schools that are very selective in their intake). In our research we compute the average effects for a relatively large number of pupils in private and state schools across the range.

Our methods, while conventional, are not perfect – we cannot perform a randomised controlled trial of the effects of going to a rich private school; there are no locations in Britain that have had lotteries where substantial numbers of pupils are selected randomly for a private school education. Nevertheless, we are able to control for pupils’ background with a rich array of family characteristics data, including social class, income, parents’ education, region, gender, the local area deprivation score and an index of home disruption up to age 13.

If one thinks about the high fees, a 17 percent pay premium may or may not be a good ‘return’. It is hard to calculate the net lifetime return when there are many uncertainties. Nevertheless it is likely that the premium will only increase as people’s careers progress, even if it is too early to say for sure. The extra amounts earned over a career by the privately educated, added to the probability of marrying a richer partner (also evidenced in the literature), suggest that private schools may well be a good investment for those that can afford it. For this, if for no other reason, we can expect the demand for private schooling to persist. Those wanting to see change, because they would like to improve social mobility and social justice, should not expect Britain’s private schools to wither away on a declining market. That mistake has been made before, for example by the 1970s Labour governments.

The finding about charitable giving and volunteering should not stop individual private schools aiming to bring up good citizens, and those that go the extra mile to do so might want to sing about it. But if a school is to claim this as part of its ‘public benefit’, in order to help maintain the tax exemption advantages of its charitable status, then our findings suggest that the Charity Commission should be requiring some independent evidence that what it is doing makes a difference – which won’t be easy to produce.

Telegraph – Private school pupils earn 10 per cent more by the time they are 25, study finds

This blog is based upon findings from the research paper, ‘Private benefits? External benefits? Outcomes of private schooling in 21st Century Britain’, by Green, F., J. Anders, M. Henderson and G. Henseke published in November 2019 in the Journal of Social Policy.

This article was first published on the IOE London Blog.