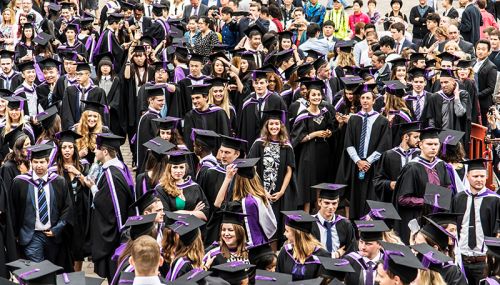 Young people who are the first in their family to go to university are less likely to attend an elite institution and are more likely to drop out than those with graduate parents, according to new research led by the UCL Centre for Longitudinal Studies.

Published today in the Oxford Review of Education, the study is the first to use large scale nationally representative data to explore the experiences of first generation or ‘first in the family’ university students in England, a group which has been prioritised in initiatives designed to widen access to higher education.

Researchers analysed data collected from over 7,700 participants in Next Steps, a longitudinal cohort study which has been following the lives of a group of people in England, born in 1989-90, since secondary school.

The most recent survey of the cohort, undertaken in 2015-16 at age 25, covered questions about university education, including where participants had studied and which courses they had taken. To assess how first generation university students fare in the higher education system, compared to those with graduate parents, the researchers took account of a range of factors, including other aspects of their family background, such as income and ethnicity, as well as prior academic achievement.

The findings show that by age 25, 27% of the cohort had gained a degree, two thirds of which were the first member of their family to go to university. Among children of non-graduates, those who had gone on to higher education tended to have already done better academically compared to those who had not gone to university.

Probing deeper into young people’s university and subject choices, the researchers found some clear differences between those who had been the first in their family to get a degree compared to those whose parents were graduates. Compared to children of graduate parents, first generation graduates were less likely to have attended one of the prestigious Russell Group universities, and were more likely to have opted for subjects that led to higher earnings and had a clear path from university to the job market, including degrees in law, economics and management.

The study authors also found that first in the family students were at greater risk of dropping out of university compared to those who had a parent who had been through the system. Overall, while more than two out of three of all university students completed their degrees, this share was four percentage points lower among those without graduate parents.

The findings underline the importance of equipping first generation students with more information and support that enables them to navigate the university system and make the best choices.

Co-author, Dr Nikki Shure (UCL Institute of Education), said: “Without parents’ knowledge and experience to guide them, first in the family students may struggle to navigate the university system and feel daunted by the admissions processes of some of the more elite institutions.

“The transition to higher education is a big step for anyone, and settling into university life isn’t always easy. This can be especially so for students whose parents can’t draw on their own experiences to help them prepare, and this could be what’s behind the higher dropout rates we see among this group.

“We encourage all universities to think about what more they can do to offer guidance and advice to first in the family students, both at the application stage and once they have enrolled, so they have the best chance of fulfilling their potential. We know of first in the family societies, clubs and mentorship schemes that may provide support.”

Last year, a target set in 1999 by former Prime Minister Tony Blair to get 50% of young adults into higher education “in the next century” was reached for the first time. In a speech on 9 July 2020, Education Secretary, Gavin Williamson, signaled a move away from this target to a greater focus on further education and apprenticeships.

“As the evidence from our study suggests, first generation university students are already at a disadvantage and could be missing out on the help they need to unlock their potential in the higher education system. We hope that the departure from the target of 50% of young people going to university does not have the undesirable side effect that only the most advantaged students access high status courses at high status universities.”

Cheryl Lloyd, Education Programme Head at the Nuffield Foundation, the project’s funder, said: “This new research shows that a student’s family background is strongly linked to their educational attainment and their post-18 pathways, including the university they attend and their likelihood of completing a degree. First in family students can benefit from opportunities to develop skills beyond the classroom. As an independent evaluation of our Nuffield Research Placement programme showed, Year 12 students from disadvantaged backgrounds who complete a work placement are more likely to go on to study a STEM course (science, technology, engineering and maths) at a Russell Group university.”

‘Moving on up: “First in family” university graduates in England’ by Morag Henderson, Nikki Shure and Anna Adamecz-Völgyi will be published online in the Oxford Review of Education on Wednesday 12 August 2020 at 00.01 UK time.

Next Steps (previously known as the Longitudinal Study of Young People in England) is a nationally-representative study that has been following the lives of about 16,000 young people born in 1989-90 who attended secondary school in England. It began in 2004 when the participants were in Year 9 and turning 14 years old, and continues to follow them through their adult lives. Next Steps is managed by the UCL Centre for Longitudinal Studies at the UCL Institute of Education, and is funded by the Economic and Social Research Council. From 2004 to 2012, the study was managed and funded by the Department for Education. Visit www.cls.ucl.ac.uk/next-steps and follow @CLScohorts.

The Nuffield Foundation is an independent charitable trust with a mission to advance social wellbeing. It funds research that informs social policy, primarily in education, welfare, and justice. It also funds student programmes that provide opportunities for young people to develop skills in quantitative and scientific methods. The Nuffield Foundation is the founder and co-funder of the Nuffield Council on Bioethics and the Ada Lovelace Institute. The Foundation has funded this project, but the views expressed are those of the authors and not necessarily the Foundation. Visit www.nuffieldfoundation.org.

The project was also funded by the Centre for Global Higher Education.

About the UCL Institute of Education
The UCL Institute of Education is a world-leading centre for research and teaching in education and social science, ranked number one for education worldwide in the 2014, 2015, 2016, 2017, 2018, 2019 and 2020 QS World University Rankings. It was awarded the Queen’s Anniversary Prize in 2016. In 2014, the Institute secured ‘outstanding’ grades from Ofsted on every criterion for its initial teacher training, across primary, secondary and further education programmes. In the most recent Research Excellence Framework assessment of university research, it was top for ‘research power’ (GPA multiplied by the size of the entry) in education. Founded in 1902, the Institute currently has more than 8,000 students and 800 staff. In December 2014 it became a single-faculty school of UCL, called the UCL Institute of Education. www.ucl.ac.uk/ioe.

About UCL – London’s Global University
UCL is a diverse community with the freedom to challenge and think differently.

About the Economic and Social Research Council (ESRC).
The ESRC is part of UK Research and Innovation, a non-departmental public body funded by a grant-in-aid from the UK government. For more information visit www.ukri.org.

The ESRC is the UK’s largest funder of research on the social and economic questions facing us today. It supports the development and training of the UK’s future social scientists and also funds major studies that provide the infrastructure for research. ESRC-funded research informs policy-makers and practitioners and helps make businesses, voluntary bodies and other organisations more effective.

RT @suttontrust: We're delighted to be working on COSMO (Covid Social Mobility and Opportunities Study) with @CEPEO_UCL and @CLScohorts. T…