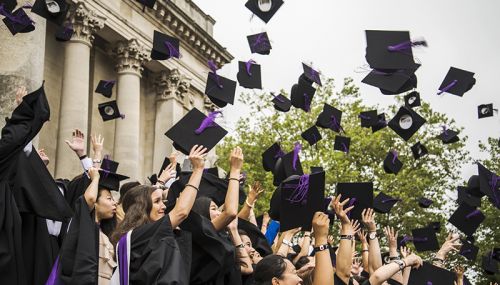 Women who are the first in their family to graduate from university earn 7% less in their mid-20s compared to female graduates whose parents attended university. In contrast, first generation male graduates tend not to face a similar pay penalty.

First generation, or ‘first in family’ university students, are less likely to attend an elite institution and 4% more likely to drop out than those with graduate parents, according to new research from the UCL Centre for Longitudinal Studies, funded by the Nuffield Foundation.

The research team analysed data collected from over 7,700 participants taking part in Next Steps, a longitudinal cohort study which has been following the lives of a group of people in England, born in 1989-90, since secondary school.

The government recently urged universities to reduce dropout rates and introduce new targets to support disadvantaged students through university and into highly paid, skilled jobs. This new research reveals that students with non-graduate parents face multiple disadvantages when it comes to university participation.

The evidence shows that the first in family female pay gap is only partly explained by the fact that unlike first generation male graduates, first in family female graduates have, on average, lower pre-university educational attainment than their female peers with at least one graduate parent. They are also less likely to attend an elite HE institution, tend to work in smaller firms, work in jobs that don’t require a degree, and are more likely to become mothers by age 25.

Lead author, Dr Morag Henderson (UCL Centre for Longitudinal Studies), said: “Universities should target first generation students in their recruitment and ensure that there are systems to support them while at university. We recommend that universities target some of their successful mentoring schemes specifically to first in family students to reduce the risk of dropout among this group.

“And while it is encouraging to hear the government suggesting that university is ’as much about getting on as it is about getting in’¹, their new plans to reduce dropout rates and set targets for entry into well-paid jobs among disadvantaged graduates should consider those who are first in their family to attend university.”

Cheryl Lloyd (education programme head at the Nuffield Foundation) said: “This research confirms that ‘first in family’ should continue to be a component of widening participation measures used by universities and other programmes aiming to support young people to access and succeed in higher education.

“Policymakers should also work with employers and stakeholders across the education sector to improve support for students who are the first in their family to attend university across all phases of education, to improve attainment and to help students make decisions about further study and career pathways.”

Nicola Dandridge (chief executive of the Office for Students) said: “A university education should open doors for students from all backgrounds, and a pay gap of this size for women who were the first in their family to go to university demonstrates the need to maintain focus on supporting students throughout their courses and as they look towards life after graduation.

“Universities and colleges should pay close attention to their graduates’ next steps, and make use of data such as this to ensure that they have measures in place to target support for their most disadvantaged students, and to help women of all backgrounds move into rewarding careers,” she added.

The report will be released at an online event on 15 December, ‘Widening participation in higher education: longitudinal research on the ‘first in family’ student experience and labour market outcomes’

The Nuffield Foundation is an independent charitable trust with a mission to advance social well-being. It funds research that informs social policy, primarily in Education, Welfare, and Justice. It also funds student programmes that provide opportunities for young people to develop skills in quantitative and scientific methods. The Nuffield Foundation is the founder and co-funder of the Nuffield Council on Bioethics and the Ada Lovelace Institute. The Foundation has funded this project, but the views expressed are those of the authors and not necessarily the Foundation. Visit www.nuffieldfoundation.org