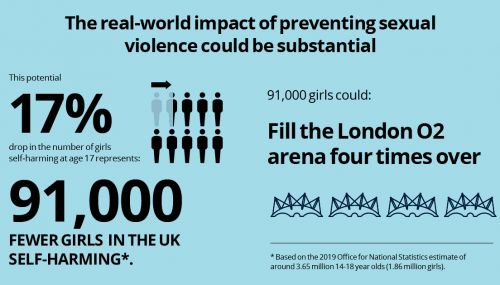 The prevalence of serious mental health problems among 17-year-olds could drop by as much as 16.8% for girls and 8.4% for boys if they were not subjected to sexual violence, such as sexual assault and harassment, according to estimates from UCL researchers.

The new research, published today in The Lancet Psychiatry, uses information from 9,971 young people born across the UK in 2000-02, who are being followed by the Millennium Cohort Study. At the age of 17, just over 1,000 girls and 260 boys reported they had experienced sexual assault or an unwelcome sexual approach in the previous 12 months.

The researchers found that rates of two serious mental health problems – severe psychological distress and self-harm – were higher, on average, among victims than among those who did not report experiencing sexual assault or harassment by at this age. This was true even when taking into account a wide range of other factors known to affect teenagers’ risk of experiencing sexual violence and mental ill health.

The authors calculated that in a hypothetical scenario* where sexual assault and harassment were eliminated, rates of self-harm among teenage girls might drop by 16.8% – from the current level of 28.9% in a world with these forms of sexual violence, to 24% (so a five-percentage point reduction) in a world without. Additionally, high levels of psychological distress might drop by 14% (22.6% v 19.5%).

Co-author Professor Praveetha Patalay (UCL Centre for Longitudinal Studies and MRC Unit of Lifelong Health and Ageing at UCL) said: “From these findings, we are able to calculate, for instance, that 4,900 in every 100,000 girls would be less likely to self-harm if sexual assault and harassment among this age group could be prevented. It is critical that we better understand the impact of sexual violence on mental health problems, particularly among girls, who are disproportionally more likely to experience both these things. Our findings suggest sexual assault and harassment could be an important driver of the gender gap in mental ill health that emerges in adolescence.”

The researchers compared the mental health of victims of sexual assault and harassment to other young people who were otherwise similar to them in terms of their personal and family characteristics, physical health, prior history of mental health problems, sexual development, and social relationships.

Co-author Francesca Bentivegna (Department of Psychology and Human Development at the IOE, UCL’s Faculty of Education and Society) said: “There is a startling tolerance to sexual violence across society, with low conviction rates for perpetrators and victim-blaming still prevalent. It’s possible this lack of serious concern for the effects of sexual violence may be having severe impacts on the mental health of victims. We need to ensure law enforcement and the legal system provide stronger deterrents and consequences for perpetrators. There is an urgent need for better tailored and targeted support for victims, to try to mitigate the potential long-term mental health impacts from sexual assault and harassment.”

The authors noted several limitations of their study. Sexual violence is known to be underreported, and the authors recognise that teenagers with and without serious mental health problems may differ in their likelihood of reporting such experiences.

The authors were unable to investigate a wider range of types of sexual violence, such as specific experience of online sexual harassment, as these were not covered by the data. Information on perpetrators, severity, or frequency of sexual assault and harassment was also not available.

Finally, as this is an observational study, the authors noted the challenges in establishing cause and effect. The study makes use of very detailed data to account for a wide range of factors that may have influenced the link between experiences of sexual assault and harassment and serious mental health problems. However, it would be impossible to rule out with certainty the influence of every possible factor.

*Hypothetical scenario: In this study of observational data, researchers used population attributable fractions to estimate the impact of preventing sexual violence in this age group on their mental health outcomes, which is an estimation method that assumes a causal link between sexual violence and mental health outcomes (after demonstrating the strength of this assumption through the extensive controls, linear regressions, matched analysis and sensitivity checks).

The impact of sexual violence in mid-adolescence on mental health: a UK population-based longitudinal study by Francesca Bentivegna and Prof Praveetha Patalay and funded by the Medical Research Council is available to read on the The Lancet Psychiatry website.

In regards this research, the Lancet has commissioned an independent expert commentary, which is also available on The Lancet Psychiatry website.

If you have been affected by the issues raised in this report and need support:

Children and young people affected by sexual violence or mental health issues can find support, information and details about their local NHS mental health services at www.youngminds.org.uk/find-help or call Childline on 0800 1111.

For adults, whether you’re concerned about yourself or a loved one, you can find local NHS urgent mental health helplines and a list of mental health charities, organisations and support groups offering expert advice, on the NHS website at: www.nhs.uk/conditions/stress-anxiety-depression/mental-health-helplines/ or call Samaritans on 116 123.

Sexual violence was assessed using two yes/no questions from the self-reported questionnaire the participants answered at age 17: in the previous 12 months, had anyone made an unwelcome sexual approach to them, or assaulted them sexually.

Measures of mental ill-health at age 17

Self-harm: Self-harm was assessed with a yes/no question where participants were asked, “During the last year, have you hurt yourself on purpose in any of the following ways: cut or stabbed, burned, bruised or pinched, overdosed, pulled out hair, other?”

Attempted suicide: Study members responded yes or no to the following question, “Have you ever hurt yourself on purpose in an attempt to end your life?”

This study uses data from a nationally-representative sample of 9,971 young people (5,119 girls and 4,852 boys) born across the UK in 2000-02, who are part of the Millennium Cohort Study (MCS). MCS is following 19,517 people born at the turn of the millennium, building a uniquely detailed portrait of the children of the new century. The study is managed by the Centre for Longitudinal Studies at the IOE, UCL’s Faculty of Education and Society. It is funded by the Economic and Social Research Council.