‘Aim higher’ is an effective message from teachers, study finds 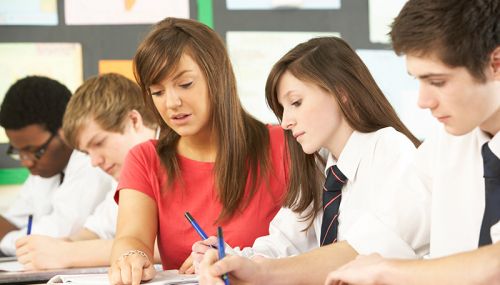 Students encouraged by their teachers to stay on in education are more likely to do A-levels and apply to university, according to findings from Next Steps.

Dr Benjamin Alcott from the University of Cambridge Faculty of Education used information from 4,300 young people born in 1989-90 who attended secondary school in England and are being followed by a study called Next Steps, which is managed by the Centre for Longitudinal Studies. Pupils were asked whether their teachers had told them they should stay on in full-time education when they were in their final year of compulsory schooling.

Across all students, regardless of background, enrolment on A-level courses was, on average, 8 percentage points higher among those who had been encouraged, compared with young people who had not been encouraged.

Encouragement offered in the run up to GCSEs seemed to have lasting effect. Rates of entry to higher education were 4 percentage points higher for students who had been encouraged, regardless of background and over and above the effect of encouragement on staying on for A-level.

Among students whose parents had no educational qualifications, the effect of encouragement was greatest. The rate of entry to higher education was 10 percentage points higher for those who had been encouraged.

Education policy has changed since the data for the research was gathered in 2006. Since 2013, all young people in England were required to remain in education or training until they were 17, with the age being raised again in 2015 to 18.