The origins of the 1970 British Cohort Study 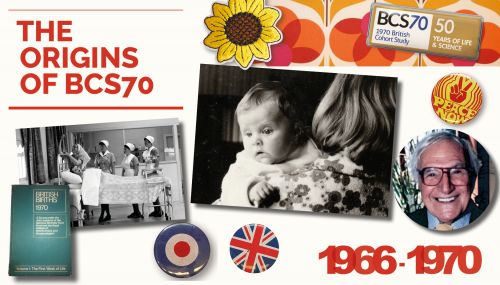 The 1970 British Cohort Study (BCS70) began life as the British Births Survey (BBS) and aimed to collect information about all babies born in England, Scotland, Wales and Northern Ireland during a single week in April 1970. More than 17,000 babies were included in the survey.

Plans to set up the study were afoot as early as 1966, when the National Birthday Trust Fund met with the Royal College of Obstetricians and Gynaecologists and members of government to consider the possibility of starting a new national survey. They had been inspired by the 1958 National Child Development Study started by paediatrician, Neville Butler, which according to the president of the Royal College, Sir Stanley Clayton, had made a ”great contribution to the improvement of maternal and obstetric care”.

With his knowledge and experience of running the 1958 study, Neville Butler joined the BBS steering committee to help drive the project forward with the study’s first directors, Director of the Royal College, Roma Chamberlain and obstetrician, Geoffrey Chamberlain. Neville Butler explained that at its inception the main aims of the BBS, “were to examine the links between mothers’ and children’s social and biological characteristics and neonatal health, and to also compare these data with results from the 1958 generation”.

After much planning, a pilot study got underway in 1969 with information collected on 455 babies – one group born during a single week in Reading, Westminster and Belfast, and another group born during one week in Dundee, Angus and Forfar. With lessons learned and adjustments made, it was decided that the new survey should go ahead in 1970.

It was hoped that the study would be as comprehensive as possible – including mothers giving birth in NHS and private hospitals, army facilities, mother and baby homes, and those having home births. The working group set up to administer the survey attempted to gain the attention of doctors, midwives and nurses across the UK through articles in the midwifery and nursing journals, and through writing directly to general practitioners. In addition, the wide publicity subsequently given to the study by the national press resulted in midwives in private practice writing to the working group to ask for the questionnaire forms so they could take part in the study. As a result of the massive publicity effort, all but one NHS hospital took part.

During the week of the births, the questionnaires were completed by the midwife who had undertaken the delivery, or by a senior midwife. The senior midwives in the hospital and domiciliary services then checked that all questions had been answered before the questionnaire forms were sent to the departments of the Medical Officers of Health to be matched against the notifications of births in each region. Ninety percent of the questionnaires were returned within the first four months, with the last one arriving on 21 December 1970.

It is estimated that information from 96-98 percent of all births was collected from that single week in April 1970 – an astonishing 17,196 babies.