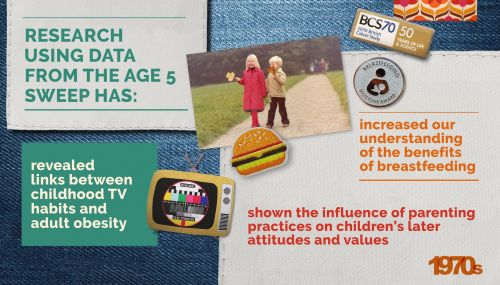 Thanks to findings from the 1970 British Cohort Study (BCS70) Age 5 Sweep we have increased our understanding of the benefits of breastfeeding, the links between TV viewing and adult obesity, and the influence of parenting practices on children’s later attitudes.

BCS70 research has shown that children who were breastfed for a month or more were likely to do better in cognitive tests at age 5.

Children tended to gain higher scores in cognitive assessments at age 5 – designed to measure their vocabulary, their visual perception and hand to eye coordination – the longer they were breastfed for. Those who were breastfed for at least three months got the best results. These findings remained even after considering social background and biological factors, such as child’s birthweight.

Because of these findings, published almost four decades ago, we now know more about the wide-ranging benefits of breastfeeding. In the intervening years, maternity services have promoted the positive benefits of breastfeeding, and among mothers giving birth to children at the turn of the millennium, 67 percent breastfed for at least one day, and 45 percent were still breastfeeding after one month. Read the full report.

Another study using NCDS and BCS70 data found that children who were breastfed tended to fare better in cognitive tests and had better mental health and wellbeing at age 10, which meant were more likely to climb the social ladder in adulthood. Read the full report.

1970 British Cohort Study research found a link between how much TV study participants watched when they were age 5 and their BMI (body mass index) at age 30. Taking account of a range of other factors, including family background and how much sport they did at age 10, each additional hour of TV watched on weekends at age 5 increased the risk of adult obesity by 7 per cent. Read the full report.

More recently, another team of researchers found that people who watched a lot of TV when they were 10 were much more likely to spend more than three hours a day in front of the box at age 42 than those who had watched relatively little TV in childhood.

This study also showed that 42-year-olds who watched TV for at least three hours a day were more likely to say they were in only “fair” or “poor” health and to report that they were either overweight or obese. Read the full report.

With the rise in convenience foods and takeaways, more people taking sedentary jobs, and increased car ownership during the 1970s and 1980s, the origins of the obesity epidemic can be traced to Generation X – from their mid-teens to middle age, they were more likely to be overweight or obese than the Baby Boomers before them.

This research has showed us how people’s habits early on life can influence their health in adulthood, helping policymakers and health practitioners design policies and shape guidance to slow the obesity epidemic.

People whose mums adopted anti-authoritarian parenting practices were more likely to have anti-racist values and tended to support environmentalism as adults. Children who at age 5 were raised in a lenient environment were also less likely to have support for authority, and tended not to agree with traditional marital values at age 30. The study considered childhood factors, including emotional and behavioural problems, cognitive ability, and parents’ social class, and adulthood factors, such as social class, family structure, health and mental health.

These child-rearing attitudes were linked to better mental health and wellbeing for daughters, but not for sons at age 30.

Members of BCS70 and their mothers have been answering questions about society, politics and the world since 1975. Over the past 45 years, they’ve given their views on issues as wide ranging as football hooliganism, attitudes to immigration, capital punishment, the rise of computers, and the EU.

This information has allowed us to understand more about the changing views of a generation, and enabled researchers to explore links between people’s attitudes and other facets of their lives, such as their health and mental health, education, employment, family life, and social and political participation. Read the full report.