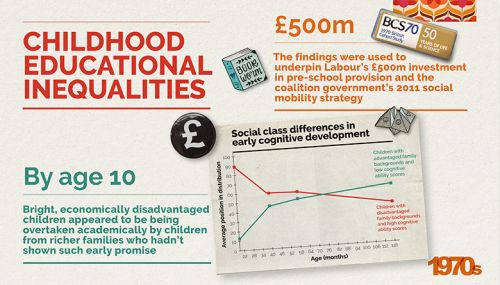 “One of the ministers present tore out one of the strategy unit’s slides and – leaning forward to put it in front of the Prime Minister (Tony Blair), declared – ‘…but what are we going to do about this?’ The slide – showed how the cognitive ability of bright children from poor backgrounds appeared to be overtaken by that of much less able children from affluent backgrounds…Within a year more than £500m was assigned to build a programme of pre-school provision for the UK.” David Halpern, former Chief Analyst at the Prime Minister’s Strategy Unit

Few pieces of longitudinal research have had such an impact on government policy as Leon Feinstein’s 2003 analysis of the 1970 British Cohort Study (BCS70), which examined participants’ cognitive development at 22 and 42 months, age 5 and age 10. The study revealed that children from better off families who initially showed poor cognitive skills stood a good chance of having caught up by age 10. But the same wasn’t true of children from low income families. In addition, by age 10, bright, economically disadvantaged children appeared to be being overtaken academically by children from richer families who hadn’t shown such early promise.

This mattered for children’s futures as performance in these early ability tasks was linked to the level of qualifications people went on to achieve by age 26.

The findings informed the policies of successive governments. They were used as evidence in Labour’s 2003 Green Paper, Every Child Matters, helping to underpin the case for greater investment in pre-school provision. Later, the coalition government drew on these and other BCS70 findings in its 2011 social mobility strategy.

The study continues to attract attention within the educational research community, with the findings debated by an array of leading academics in a 2015 article.