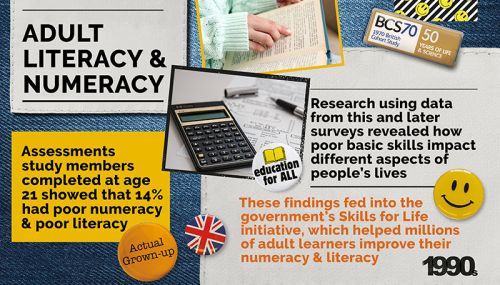 1970 British Cohort Study (BCS70) findings on adult numeracy and literacy helped to kickstart a series of government education initiatives that would improve the basic skills of millions of British adults during the 2000s.

Professor John Bynner and Dr Sam Parsons highlighted the worryingly low levels of numeracy and literacy among Britain’s adults, revealing the challenges they faced getting by without these skills.

The researchers analysed data from a sub study undertaken when cohort members were 21 years old. In this sub study, we asked a 10% sample of BCS70 members to complete a series of tasks designed to measure their functional skills, such as extracting information from the Yellow Pages and programming the 24-hour clock on a video recorder.

The findings showed that 14% of the 1,650 adults who took part had poor levels of numeracy and literacy, with 17% of women having poor skills compared to 11% of men. This was higher than among a generation of adults born 12 years earlier – members of the 1958 National Child Development Study.

The researchers showed that the difficulties adults faced without competent basic skills tended to hold them back as they made their way through their 20s. Using data from the Age 30 Sweep, they revealed that men and women with poor numeracy were more than twice as likely to be unemployed as those with a good level of numeracy. In addition, those with poor numeracy and poor literacy were less likely to be homeowners, compared to those with competent basic skills

Men with poor numeracy were more at risk of depression and had little interest in politics. Low numeracy levels appeared to have an even greater effect on women. They were at greater risk of poor physical health, more likely to have low self-esteem, tended to feel a lack of control over their lives, and were less likely to vote.

From the late 1990s, information from BCS70 would go on to inform government numeracy and literacy policies for the next decade. Chair of the Basic Skills Agency, Lord Claus Moser, cited evidence from the Age 21 Sub Study in a report looking at the poor levels of numeracy and literacy among Britain’s adults compared to those in other developed nations.

His 1999 report to government made the case for launching the Skills for Life initiative, one of the New Labour government’s flagship education policies, which aimed to tackle the numeracy, literacy and language needs of the country’s adults.

Dr Sue Pember, former Department for Education and Skills policymaker, was given responsibility for rolling out the Skills for Life initiative in 2001. In our podcast series celebrating 50 years of the 1970 British Cohort Study, Dr Pember told listeners how BCS70 research helped to galvanise a generation of adults into improving their skills.

“Back in the 1970 cohort, a report was written on basic skills. That was the grounding that made Lord Moser determined to write a report and explain what was happening to young people in literacy at the age of 16, and then adults 19 onwards. So, without the cohorts, Lord Moser wouldn’t have had the evidence for his report.

“Skills for Life – It was one of the largest social interventions we’ve ever tried in England. We demonstrated that we can do it as a country. The strategy was successful, met its targets early, went on to ensure that between 2001 and 2011, 14 million participated in adult literacy and numeracy activities, and over 8 million qualifications achieved, which produced a 13% improvement in literacy.”

As part of the Skills for Life initiative, the basic skills assessments completed by 10% of the cohort for the Age 21 Sub Study were repeated with the cohort as a whole when they were 34 years old. This enabled researchers to compare results more than a decade apart to look at how numeracy and literacy skills track across people’s lives.