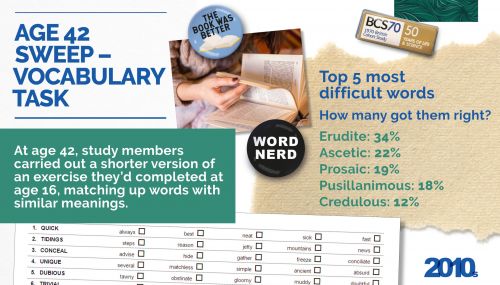 Continuing our journey through 50 years of the 1970 British Cohort Study, this week we focus on the Age 42 Sweep. Almost 10,000 study members took part in a 60-minute interview covering various topics, including relationships, economic activity, physical and mental health, and attitudes and values.

During the Age 42 Sweep, study participants were asked to repeat  a vocabulary assessment they had previously taken in 1986, at age 16. By comparing these data collected more than a quarter of a century apart researchers are able to explore potential factors behind why people’s vocabularies improve or worsen during adulthood.

Researchers analysing the results of the assessments at both ages found that cohort members who read for pleasure frequently at age 42 had experienced greater growth in their vocabulary between adolescence and midlife than those who did not read. What people chose to read as adults mattered as much as how often they read – in terms of the effect on vocabulary scores at 42. The greatest improvements between ages 16 and 42 were made by readers of ‘highbrow’ fiction.

Find out more about the Age 42 Sweep and our reading for pleasure research.