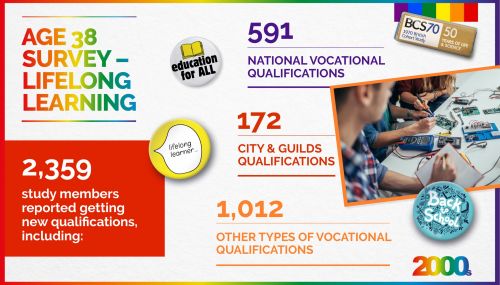 Continuing our journey through 50 years of the 1970 British Cohort Study, this week we focus on the Age 38 Sweep. Just under 9,000 study members took part in a short 25-minute telephone interview which sought to establish any changes in circumstances, as well as key events in their lives since their last interview.

Information from the Age 21 sub-study had helped to kickstart Skills for Life, an adult education initiative, in 2001. This strategy went on to ensure that between 2001 and 2011, over 8 million British adults achieved qualifications – no doubt including some study members.

Find out more about the Age 38 Sweep.