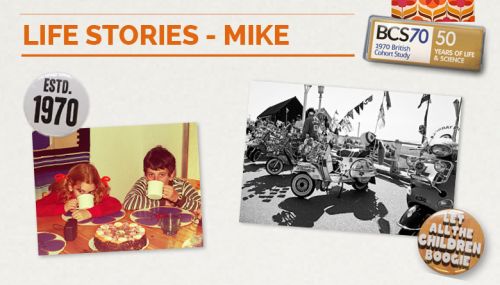 “It drops in and out of your life; you don’t hear anything for five years, and then it comes around again and gives you an opportunity to contribute to some sort of improvement in society”, says Mike, reflecting on being a BCS70 study member. “I always try to be accurate, transparent and as forthcoming as I can be. I feel a little glow after the big interview has happened that maybe something good will come of it.”

Raised in rural Hampshire, Mike first became aware that he was part of the study when he was 10, but remembers that it wasn’t a particularly big deal for him back then.

“There were other BCS70 study members in my primary school, so it just seemed like, ‘oh, it’s just a thing people do’. I didn’t realise at the time that most other study members have probably never met anyone else taking part.”

He vividly recalls it being fun during childhood, but remembers that the study seemed to change emphasis when he reached adolescence.

“The early years seemed to be looking at how we were developing physically. They would tap us on the knee and check our breathing, but when we got to our mid-teens they started asking us about our views and attitudes towards society.”

Over the years he’s gradually recognised the importance of his contribution, and now feels a duty to take part every time he’s called.

Mike enjoyed primary school, but then went to a tough secondary school where academic achievement was discouraged by his fellow pupils. During his teens, he was also a Vespa-riding scooter boy with a love for Paul Weller.

After leaving school at 16 he joined a large company specialising in defence and began an engineering apprenticeship. They paid for him to go to night school, and he eventually gained qualifications to go to university to study engineering.

“Getting that opportunity was unbelievable really. The training programme had been developed over decades, and you just wouldn’t get it now. It was very well structured and gave me thorough engineering grounding which I feel really lucky to have received.”

One year into the course, he decided to transfer to art school to study 3D design and later web design. Graduating in the mid-90s, Mike found it difficult to get his break in the creative industries, but finally found an opening as a graphic designer in London. He later headed back south to work in marketing and communications in the university sector, a role he enjoyed for 13 years.

Mike was later made redundant, but a couple of years prior he had met his future wife, and they had enrolled on a photography course together. Mike would use these skills to start his own business as a wedding photographer and web designer, an occupation he enjoys to this day.

“Being made redundant was depressing at the time, but I realised that it was also an opportunity to start my own business – and that’s what I’ve been doing since then. It was a huge turning point in my life.”