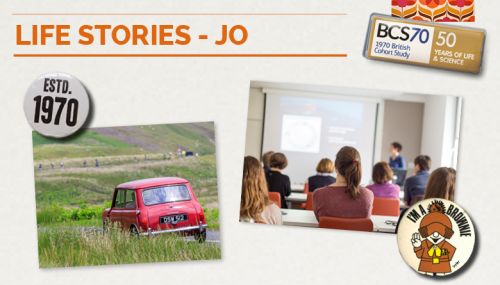 “I think that the teenagers of today need to be treated more like adults and should be given better job opportunities. Teenagers of today are too often branded as hooligans and people who do no good. Some of them are admittedly like that, but the majority of them aren’t.”

That’s how Jo answered a question in the Age 16 Survey about what would make things better for her generation. Speaking to her about where her own life has taken her, you can see 16-year-old Jo’s passionate views and clear insights reflected in her career choices.

“When it came to getting towards finishing school, I decided that I wanted to do primary teaching or social work. I enjoyed working with kids. I had a Brownie pack. I still do. But I was also really interested in social work. I thought people needed to be treated a bit more fairly. My mum had lengthy periods of mental ill-health when I was growing up, and I always felt that she was quite stigmatised, and that had an impact on her and on the rest of the family. So I wanted to do something about that.”

Jo applied to study teaching and social work, and heard back about her social work application first: “I just went for it, went for the interview, got on the course and that was it.”

The course was at Jo’s local university in Scotland, so she lived at home with her parents but went away on work placements in different parts of the country.

“I was away from home for a couple of three-month periods. It doesn’t sound very long, but packing up my little Mini car and going up to the Highlands of Scotland, not knowing what I was going to, where I was going to be staying, what was going to be happening…all that was exciting for me.”

After she qualified, Jo was quickly snapped up to do what she thought would be her dream job, working in residential child care. But overstretched resources and a lack of support made the work unbearable. She recalls: “I thought, I’m going to be out there and I’m going to change the world. And then I got out there and it was dreadful.”

When things started to take their toll on her health, Jo left her job and went to work for her dad and his building business for a time (“mixing up cement and doing stuff like that”). She decided to give social work another chance, taking up a more general role to begin with and then a position working with people who offend.

“It was just brilliant. I loved the variety of it and multi-agency-working, trying to understand people’s journeys and what got people there, and what you could do to try and get people out of that.”

Jo met her husband, who also works in the justice system, through her job. She says that having this in common has helped them cope with the stresses and strains that can come with the work.

“We understand each other and we understand the complexities of the work, and the pressures. And we’re so different, you know – he was a punk!”

After almost 20 years, Jo took a change of direction and now teaches social work at the university where she studied, a role which she also loves.

Reflecting on her life choices, Jo says that her drive to help people is something she got from her mum. She describes her as someone who always puts others first and “an absolute gem, one of the nicest people you could ever, ever meet.” This family trait is evident in the decision Jo’s parents took 50 years ago to let their daughter be part of our study, and in Jo’s continued participation.

“I’ve said to them, I’m really glad that you signed me up for this because if it’s of benefit to other people, then I’m all for it.”