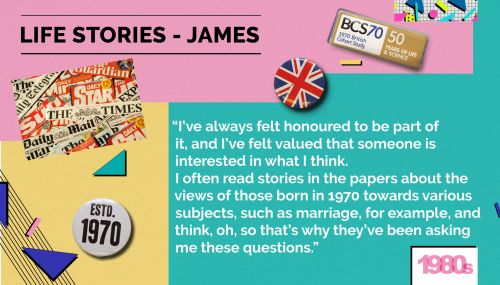 James remembers his mum encouraging him to take part in the study from an early age.

“My mum was always really keen for me to be involved. She explained what the study involved, and always made sure that I did all the surveys or health checks. She thought it was a good thing to be part of.”

James soon realised that even in his small Gloucestershire school, he wasn’t the only child born in that special week in April.

“There was another pupil in my class who was also part of the study when I was growing up. Over the years, we used to chat about it at school. And then later, I’d occasionally bump into them, and we’d say, are you still doing it? Yes, I am.”

James recalls enjoying his childhood and can remember slowly gaining an interest and curiosity about the outside world as he approached his GCSE exams.

“At age 16, I was very interested in politics and wanted to work towards becoming a journalist at a big city newspaper. I think, looking back, growing up in a small town, I had quite itchy feet to discover new places, go to university or get a job.”

James fulfilled his ambitions by studying politics and history at university, before training as a journalist. He spent his 20s as a reporter before moving into public relations. He then married his wife in his early 30s, and they started a family.

“We had a few more years in London as a family and then realised we’d had our big city fix. We decided to move back to Gloucestershire, so we could have more space, and our children could have the sort of upbringing we both enjoyed.”

Now firmly ensconced in the Cotswold hills for several years, James continues to work in public relations, and takes part in amateur theatre, a hobby he has enjoyed since his youth.

After five decades contributing to the study, James believes that it’s been a very worthwhile endeavour, and feels proud to have been involved.

“I’ve always felt honoured to be part of it, and I’ve felt valued that someone is interested in what I think. I often read stories in the papers about the views of those born in 1970 towards various subjects, such as marriage, for example, and think, oh, so that’s why they’ve been asking me these questions.”