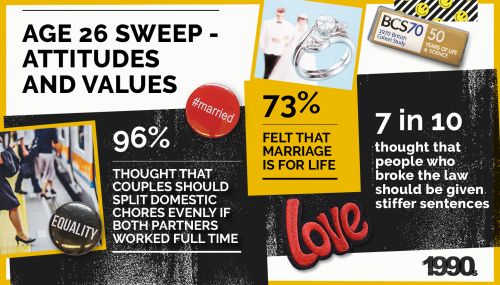 Throughout the 50th year of the 1970 British Cohort Study (BCS70), we’ll be highlighting interesting features of the survey design, delving deeper into the questionnaires and pulling out descriptive statistics from the data.

The Age 26 Sweep was the first adult follow-up of BCS70, and over 9,000 cohort members took part. The questionnaire covered qualifications and training, employment, relationships, children, physical and mental health, drinking and smoking. We also sought cohort members’ views on a range of topics, including gender equality, politics and marriage. The questionnaire contained 17 statements, such as “When both partners work full time, the man should take an equal share of domestic chores”, and respondents were asked to indicate their agreement or disagreement with each of these. All of these statements had been used previously in the 1991 survey of participants in the 1958 National Child Development Study, when they were 33. So now researchers would be able to compare the views of two different generations across the same subjects. Many of the questions were repeated in later sweeps, to see how the BCS70 cohort’s attitudes and values may have changed as they got older.

Find out more about the Age 26 Sweep.